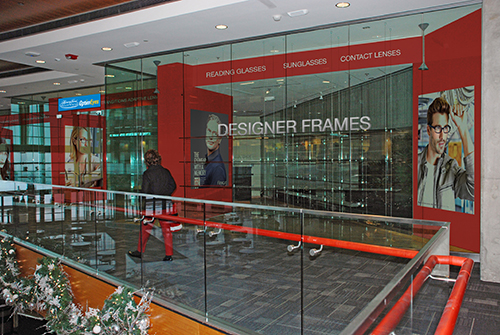 Henry Ford OptimEyes — an eye care business with nearly 20 locations throughout the metro area — is opening its newest location in the Renaissance Center in downtown Detroit in July.

“The Renaissance Center did a survey and found out that, as far as the building’s employees were concerned, eye care was very important to them,” says Katie Darr, a spokeswoman for OptimEyes, part of the Henry Ford Health System in Detroit. “So they went out, did some mystery shopping, and approached us (to fill that need). We’re very honored to be a part of the Renaissance Center community.”

With more than 12,000 employees at the RenCen, including General Motor’s global headquarters with 5,000 employees, as well as the Marriott hotel, OptimEyes will have ready access to daily workers, hotel guests, and visitors. Planned store hours are 7 a.m. to 6 p.m., Monday through Friday.

The 3,000-square-foot outlet — which will overlook the GM Wintergarden, directly above Andiamo Detroit Riverfront — will carry more than 1,000 frames, with brands including Gucci, Tom Ford, and Christian Dior. There will also be a large sunglasses selection, including products from Oakley and Maui Jim.

“There’s going to be something that fits every face, style, budget, and prescription,” Darr says. “We also accept most insurance plans, and we’re now accepting CareCredit.”

In other news, OptimEyes, which first launched in 1981 and now sees more than 250,000 patients each year, will move its Southgate store to a new downriver location this fall. “It will be much bigger, with better lighting and parking for our patients,” Darr says.