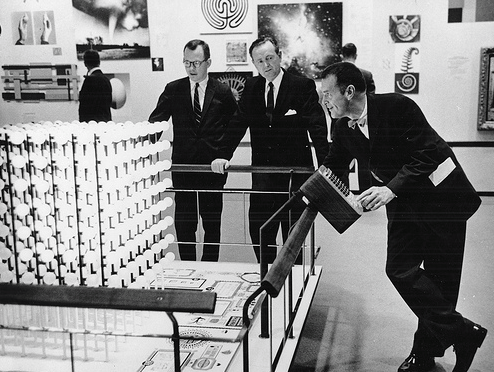 The Henry Ford in Dearborn today announced it acquired a significant interactive exhibit called Mathematica that presents math concepts through installations and models. It will go on display inside the Henry Ford Museum next year.

“Mathematica not only changed the way exhibitions were designed, but it was created to address a specific problem within the museum and education community that is still relevant today, which is a better way to convey mathematical principles and ideas to visitors,” says Patricia Mooradian, president of The Henry Ford.

Mathematica was designed and produced in 1961 by Charles and Ray Eames, a husband and wife team, who were well known for their work in architecture and modern furniture design. The couple met in 1940 while teaching at the Cranbrook Academy of Art in Bloomfield Hills.

IBM underwrote the project, and the Eames created three versions of the exhibit. The first is installed at the New York Hall of Science, the second is owned by the Museum of Science in Boston, and the third was originally installed within the IBM Pavilion at the 1964 New York World’s Fair before it was moved to the Pacific Science Center in Seattle. Following that, it became the property of the Eames Office. It’s the third version that has been acquired by The Henry Ford.

The exhibit explains mathematical concepts and ideas through imagery, interaction, and models. In addition to the Mathematica exhibit, the IBM Pavilion included a large theater located inside the “Information Machine,” where guests were introduced to the attributes of computers via nine large video screens.

“Mathematica reveals that the ‘world of numbers’ represents a tiny percentage of the world of mathematics,” says Marc Greuther, chief curator and senior director, historical resources at The Henry Ford.  “The exhibit sidesteps boundaries between education, play, art, and science — plus it’s recognized historically as an Eames design landmark.”

Details about when the exhibit will be open to the public will be released at a later date.