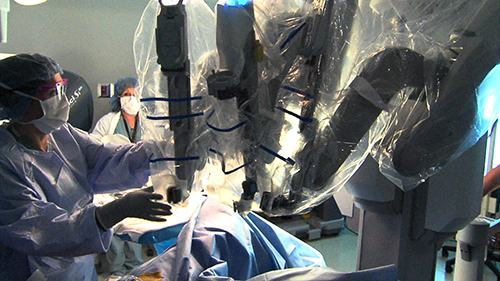 Surgeons from the Vattikuti Urology Institute at Henry Ford Hospital in Detroit successfully transplanted kidneys into three recipients using the country’s first robot-assisted procedures in which the organ is cooled prior to being placed inside of a patient.

The process — which uses a slushy, sterile saline solution to cool the kidney and surrounding tissues — has resulted in shorter recovery times and significantly less pain reported by the patients, say hospital officials. Dr. Mani Menon, chair of the Vattikuti Urology Institute, who devised the method, was on site to advise and observe the three surgeries, performed last month.

Menon says time is precious when performing a kidney transplant and the new procedure allows doctors more time and the robot improves visibility during the operation.

“What appealed to me as a surgeon was that, with robotics, I could see the tissues much, much better. I could see things that I was never able to see with the robot.”

The robot does nothing by itself, Menon says. Rather, the surgeon uses hand and foot controls to guide the robotic tools to surgically connect the vein, artery, and ureter during the procedure.

Two of the three patients were released four days after their successful transplants. The third patient was also released and is doing well, say hospital officials.

The surgeries follow preliminary studies in India, where a collaboration of surgeons from the Vattikuti Urology Institute at Henry Ford Hospital and Vattikuti Foundation-sponsored robotic programs at two hospitals completed more than 120 kidney transplants using this method.

The results of these studies were recently published in European Urology and presented at the 2014 Annual Meeting of the American Urological Association held in May.