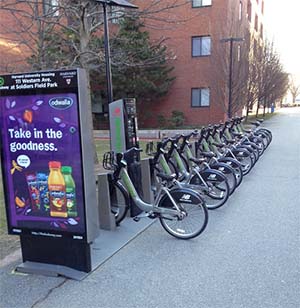 The Downtown Detroit Partnership, a coalition of corporate, civic, and philanthropic leaders that develops programs designed to enliven the central business district, today announced Detroit-based Henry Ford Health System and the Detroit Department of Transportation will partner to support the first public bike share program in the city.

“The overall level of interest and support in bringing bike share to Detroit has been incredibly encouraging, and we’re looking forward to exploring how we can use this new transportation option to connect Detroiters to economic opportunity and increase the number of choices people have to get around,” says Lisa Nuszkowski, executive director of the Detroit Bike Share program at the DDP.

The goal of the first phase of the program is to provide about 350 bikes and 35 stations throughout downtown Detroit. Nuszkowski says the system is designed for short distance trips to take advantage of Detroit’s 170 miles of bike lanes and greenways.

Nuszkowski says as the title sponsor of the program, Henry Ford has pledged a three-year financial commitment. The terms of the pledge have not been disclosed. In turn, Detroit’s DOT worked with the DDP to secure federal grant funding, which will be used to purchase the bike share stations.

Detroit-based Hudson-Webber Foundation, also a supporter of the program, along with the Michigan Department of Transportation, Southeast Michigan Council of Governments, and Troy-based Kresge Foundation, says about 250 bikes pass through downtown Detroit on a typical weekday afternoon.

Nuszkowski says the DDP is seeking additional sponsors and partners to launch the bike share program next year. For more information, contact Nuszkowski at bikeshare@downtowndetroit.org.

A request for proposals for an equipment provider and system operations will be released by Detroit officials later this month.