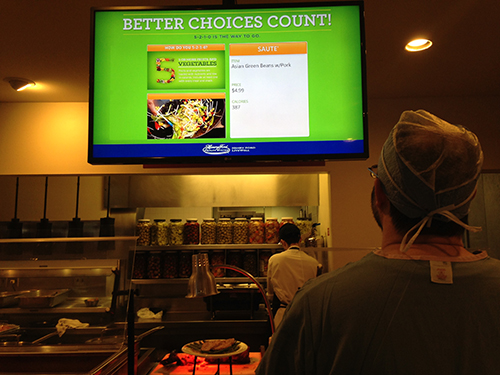 The implementation of healthier food choices at Henry Ford Health System has involved cutting seven tons of fat from food options in its hospital cafeterias and increasing fruit and vegetable purchases by 10 percent annually.

“Healthy food doesn’t need to be expensive — or boring,” said John Miller, director of culinary wellness. “We’re excited to see the response as we introduce even more healthy food options throughout the hospital system.”

In 2013, Henry Ford became the only hospital system in Michigan to join the Partnership for a Healthier America’s Hospital Healthy Food Initiative, which aims to improve the nutrition of patient meals as well as what is offered in on-site cafés. Since then, the system removed all fryers and offers only healthy food choice options on cafeteria menus.

“We have a responsibility to provide our communities with a wide variety of affordable, delicious, healthy food options — making the healthy choice the easy choice,” said Kimberlydawn Wisdom, Henry Ford’s chief wellness officer, who will speak about the initiative at PHA’s Building a Healthier Future Summit, to be held in Washington, D.C., on Friday. “Our patients, employees, and other customers like what we’re doing.”

Henry Ford Health System has already met the PHA initiative of increasing fruit and vegetable purchases by 2015, with two of its hospitals spending more than 20 percent on produce last year.

Looking forward, Wisdom says at least 50 percent of a la carte entrees and side dishes will meet PHA’s healthy guidelines in all four of Henry Ford’s hospitals in 2014. The system will also phase out all deep fat fried products.

The initiative began in 2009 with the opening of Henry Ford West Bloomfield Hospital at Maple and Drake. Gerard Van Grinsven, the then president and CEO of the hospital, initiated health food choices throughout the hospital. He also developed a neighboring greenhouse that produces fruits and vegetables for patients and workers.

“We firmly believe that this commitment will allow us to better fulfill our main goal of providing our patients with the best care possible, while also promoting health throughout the community,” Wisdom said.