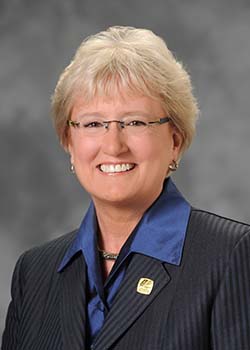 President Barack Obama has announced that he plans to appoint Nancy Schlichting, CEO of Henry Ford Health System in Detroit, as chairperson of the Commission on Care, an organization established to examine how to best deliver health care to military veterans.

“These fine public servants bring a depth of experience and tremendous dedication to their important roles,” Obama says. Schlichting is among three individuals selected for presidential appointment to the commission.

Schlichting has served as the CEO of Henry Ford Health System since 2003. In 2014, she was named one of the 100 Most Influential People in Health Care in a list published in Modern Healthcare magazine and in 2010 she was named among the Powered by Women in metro Detroit by DBusiness.

Schlichting serves on the board of The Kresge Foundation, Federal Reserve Bank of Chicago – Detroit Branch, and the Detroit Economic Club, among others. In 2014, Schlichting said she would retire from Henry Ford Health System in December 2016.

The President’s Commission on Care for America’s Returning Wounded Warriors was established in 2007 by President George W. Bush to examine the effectiveness and quality of health care and benefits for military veterans returning to civilian society.