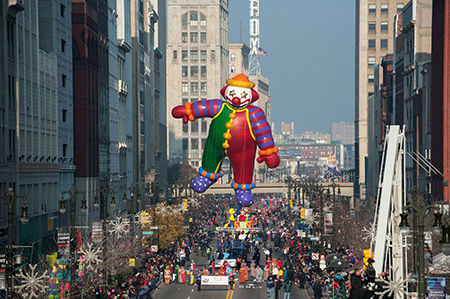 Employees at Ford World Headquarters in Dearborn will be the first to see the automaker’s new float for next week’s America’s Thanksgiving Parade along Woodward Avenue in Detroit. The 100-foot-long display will be unveiled Monday by Bill Ford, the company’s executive chairman.

The new float pays homage to the 150th anniversary of Henry Ford’s birth, including a giant likeness of the automotive pioneer sitting in front of a birthday cake. Also featured are a giant globe and a Ford Focus in recognition of the automaker’s global reach.

The float, which also highlights the global contributions by the Ford Fund and employees in the Ford Volunteer Corps, is one of nine new floats for this year’s parade. Other organizations with new floats include:

America’s Thanksgiving Parade presented by Art Van will take to the streets starting at 8:45 a.m. at Woodward and Kirby, immediately north of the Detroit Institute of Arts. The parade will be broadcast live on WDIV Local 4 from 9-10 a.m. and on WJR 760 AM.