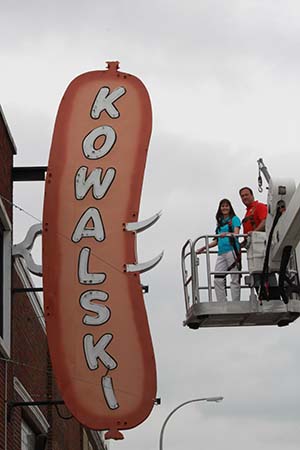 Hamtramck-based sausage maker Kowalski Companies Inc. plans to hire 200 employees, improve its production facilities with the purchase of new equipment, and expand its distribution throughout the Midwest over the next five years.

“Kowalski is very proud to be a Michigan-made product,” says Michael Kowalski, president and CEO of Kowalski. “We have had many offers to sell the facility in Hamtramck, mostly from out-of-state companies, but have declined such offers because we want to stay where (our) roots are and give employment opportunities to those who live in the area.”

Kowalski says the company plans to expand distribution of its products to Illinois, Wisconsin, Minnesota, and Pennsylvania. The sausage maker currently distributes in areas throughout Michigan, Ohio, Indiana, West Virginia, and Kentucky.

Kowalski Companies, which started as a maker of natural casing hot dogs and smoked sausage, has acquired companies throughout Michigan and Ohio, expanding its product offerings to include salad dressings, sauces, pierogies, twice baked potatoes, salads, and dips. Its products are sold in various locations throughout metro Detroit including Randazzo Fresh Market, Royal Oak’s Holiday Market, and Kroger stores.

In celebration of the company’s 95th anniversary, the company’s iconic neon-outlined sausage sign, which has identified its Holbrook Avenue headquarters facility in Hamtramck since the 1940s, was refurbished and relit.