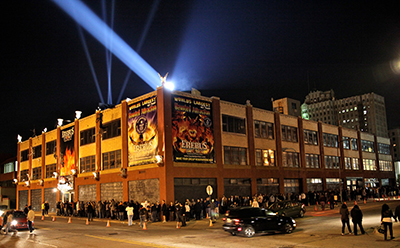 Halloween comes early this year with the opening next month of “Summer Scream,” which takes visitors through Erebus, a four-story haunted attraction in Pontiac that includes features like the “Bottomless Pit,” “The Spiked Wall,” and “The Swamp.”

“We wanted to give a taste of Halloween while the weather’s still warm,” says Debbie Kenyon, senior vice president and market manager of CBS Radio Detroit, which is co-hosting the three-day event from July 11-13.

Ed Terebus, owner of Erebus, says the event is just another way for the attraction, which sees tens of thousands of visitors each September and October, to distinguish itself from the competition.

“We’re always trying to take it to the next level,” he says. “It’s one of our main goals in life: to scare people.”

“Southeast Michigan is the haunted house capital of the world,” says Terebus, noting that there are about 60 to 100 attractions within 50 miles of his business each year. “Because of that, we can’t just go to a tradeshow and buy the cool products they have — at least 15 to 20 other (nearby) haunts will have them. So it forces us to be innovative.”

This means designing and building at least 95 percent of the features in the building, which also includes an exhibit called “Buried Alive,” which locks a person in a 6-by-6 foot room that fills with play-pit balls for 42 seconds.

“It’s pretty bizarre,” Terebus says. “First, it sounds like thunder. You’re being hit in the head, but you don’t even realize what’s going on. And by the time you do, it’s already filled over your head.

Each year, the attraction, which has been open since 2000, changes about 20 to 30 percent of its features to ensure that guests have a reason to come back the following year, says Terebus, adding that the company has plans to expand next summer.

Tickets for Summer Scream are $28, with VIP tickets (no waiting in line), priced at $45. For more information, visit hauntedpontiac.com.

IN RELATED NEWS, Colliers International announced today it will lease 10,850 square feet of retail space at 2850 Rochester Rd. in Troy to Spirit Halloween, with plans to open for the season in August.