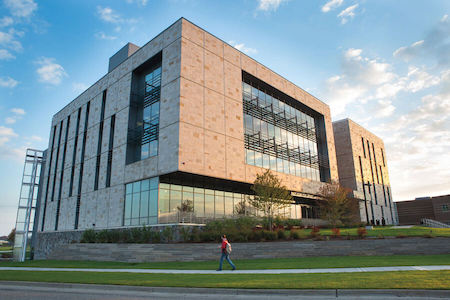 The board of trustees approved the building project at its July 14 meeting. The building will be located next to GVSU’s Cook-DeVos Center for Health Sciences and within a block of Raleigh J. Finkelstein Hall, currently under construction on Lafayette Avenue. Construction is scheduled to begin in June of next year on the expansion project, with the opening set for May 2021.

“This approval is a major turning point for Grand Valley’s health programs,” says Maria Cimitile, provost of the university. “Demand has exceeded our ability to accept highly qualified students, and these two new buildings, right in the middle of the city’s vibrant medical community, will provide exceptional opportunities for more students to attend Grand Valley and benefit from the unique combination of liberal education with professional training. This combination makes our graduates highly employable by area hospitals and medical facilities.”

The project received authorization from the Michigan Legislature, and the state approved a capital outlay request of $29 million for the five-story, 160,000-square-foot building. The rest of the funds will be provided by private donors and university bonds.

The trustees also adopted the university’s 2018 budget and set tuition rates. They approved a $237 per semester increase in tuition, bringing annual tuition for a full-time undergraduate Michigan resident to $11,994. The budget also includes $47 million in financial aid for students, an increase of more than $3.3 million to be awarded in scholarships and grants.

The state’s performance funding has allowed GVSU and president Thomas J. Haas to provide the Grand Finish grant to students who stay on track toward graduating in four years. The grant awards a $1,000 scholarship at the start of the fourth year to students with at least 90 credits. More than 13,500 students have received the Grand Finish award since it was established in 2011.

The state’s share of GVSU’s entire budget is 18 percent.