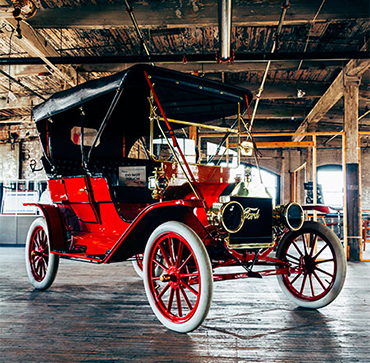 An all-volunteer crew, which Nancy Darga, the executive director for the museum calls “The Window Team,” has been working on replacing the 355 windows for over a decade, using as many original materials as possible. So far, 275 windows are in place and Darga expects the final work to be completed in 2019.

The Ford Piquette Avenue plant was built in 1904 by Ford Motor Co. Several car models, including the famous Model T, were produced in the plant. When Ford moved production to another plant, the Piquette Avenue site was bought and used as a warehouse until it fell into almost total disuse in the 1990s.

Darga has been working to restore the plant for over 15 years and the facility is now home to several antique model cars from Ford and other early manufacturers like Huff and Flanders.

Darga served on the board of the MotorCities National Heritage Area organization, which successfully lobbied Congress in 1998 to declare areas of southeast Michigan National Heritage sites, including the Milwaukee Junction area of Detroit that is home to the Piquette plant.

Today, the Piquette plant hosts tours and events, and offers educational programming for Detroit youth. One such program is a partnership with the Center for Creative Studies in which two brothers are working to build the Spirit of Detroit racecar, which was designed in the 1930s to compete with German auto racing teams but never built.

Darga hopes the museum will communicate the massive impact the Detroit auto industry has had on the country. She noted that Chrysler developed the Saturn rocket engines that took Apollo astronauts to the moon. GM made the low-gravity rover they drove around on the moon’s surface.

“I like to say the auto industry took man out of the mud and ending up putting him on the moon,” Darga said.