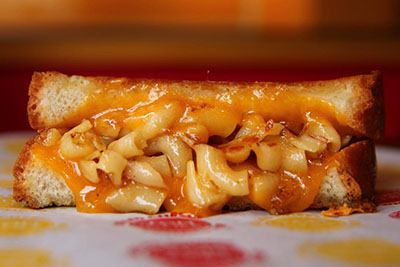 Tom+Chee, a fast-casual restaurant featuring a variety of grilled cheese sandwiches and tomato soup options, will expand with the opening of its second restaurant in Michigan in Troy next week.

“This menu is … full of fresh ingredients and options for everyone including vegan, vegetarian, and gluten-free items,” says James Cox, the local franchisee along with Paul Cox. “But what we love most about it, and what our customers continue to tell us they love most about it, is that it’s fun, quirky comfort food for the kid at heart.”

Cox says the 70-seat, 2,400-square-foot restaurant, located at 307 E. Big Beaver Rd., offers more than 20 varieties of grilled cheese sandwiches, salads, and three versions of tomato soup. Options include a macaroni and cheese grilled cheese; a bacon, blue cheese, and mozzarella grilled cheese; and a variety of grilled cheese donuts, among others. He says the entire menu is made fresh, with no fryers, freezers, or microwaves.

Tom+Chee’s first restaurant in metro Detroit opened in Northville Township last June. The Troy location will open with a ribbon-cutting ceremony on Feb. 12.

Tom+Chee started as a food truck in Cincinnati, and the business took off after the founders appeared on Shark Tank in May 2013. Trew Quackenbush and Corey Ward won a deal with Barbara Corcoran, receiving $600,000 in exchange for 30 percent of the company. The partner’s grilled cheese doughnuts have also been featured on ABC’s The Chew and Travel Channel’s Man v. Food Nation. The parent company has 170 stores under contract in 20 states.