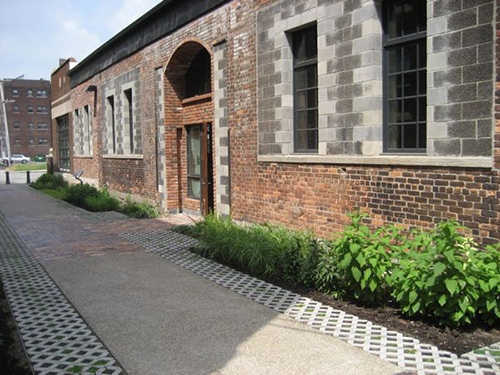 It’s a busy time for Midtown, where several projects are kicking off this month, including turning a blighted backstreet into a green alley — featuring gardens, street lighting, and reclaimed water — connecting Willis and Canfield streets.

“(The alley) has definitely been a problematic thoroughfare,” says Jackie Victor, co-founder of Avalon International Breads, located along the alley. “People avoid it. It’s full of dumpsters, and nobody wants to walk down it.”

The benefits of the makeover are twofold, Victor says. For one, it will allow pedestrians to better connect with the businesses in Willis Village — including Avalon, Flo Boutique, Goodwells Natural Food Market, and Spiral Collective — and the companies that have emerged along Canfield, home to Traffic Jam & Snug, Shinola, and Motor City Brewing Works. Plus, it offers an attraction in and of itself, she adds.

“This is an urban landscape, there’s not a lot of green,” Victor says. “Hopefully, this will be a place for people to gather. I think it’s an amazing next chapter for our neighbor’s development.”

The project will be led by Midtown Development Inc. and Shinola, whose officials say they are proud to invest in the development of the green alley as well as a new dog park near its flagship store. “Located right in the middle of a growing retail and restaurant district, the projects will not only help to beautify the neighborhood, but also add a sustainable, functional connector and amenity for both residents and visitors,” said Shinola officials in a statement.

A green alley was developed two years ago, as part of the Green Alley Project, between Canfield and Prentis, just east of Second Avenue. According to officials of Green Garage, one of the nearby businesses, the project transformed the alley — distinguished by trash, broken pavement, and overgrown weeds — to a vibrant greenway for pedestrians and bicyclists.

Additionally, HopCat will begin demo work at its new location at Canfield and Woodward. One block south, Woodward Willis LLC is set to begin construction —expected to take eight months — on a three-story, mixed-use building. The project, which will generate up to $6.4 million in investment and create 100 jobs, was approved for a $745,000 performance-based grant through the Michigan Economic Development Corp.

The MEDC also awarded Alex & Beck LLC a $178,000 performance-based grant for the renovation of the vacant Thomas Beck house, at 3980 Second Ave. When complete, the building will include more than 1,000 square feet of retail and commercial space as well as three residential units on the second and third floors.