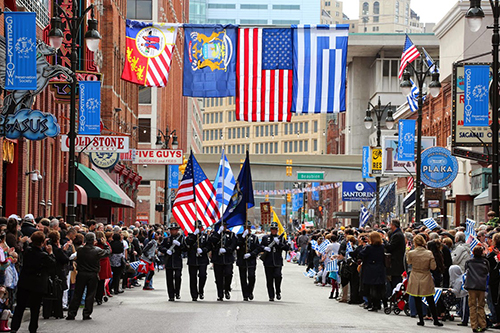 The Greektown Preservation Society will kick off the first phase of its plans to string LED lights from St. Antoine to Randolph this weekend.

“I think it’s going to give the (neighborhood) more of a festival feel,” says Tasso Teftsis, president of the Greektown Preservation Society, likening the project to string lights seen in European villages or at Larimer Square in Denver. “It will look nice and quaint. And it kind of connects the Campus Martius area with Greektown.”

To begin, the society will install 484 lights on the first block, from St. Antoine to Beaubien, on Saturday and Sunday. “I found the perfect bulb — it’s the warmest white LED light I’ve ever seen, and it takes only 1 watt of power per bulb. For this one block, I’m just going to (connect the lights) and plug it in an outlet at Astoria Pastry Shop,” says Teftsis, noting that it will take less energy to power one block of the lights than it takes to power a refrigerator.

As far as the next two blocks go, Teftsis says the society needs to raise more money to support light and installation costs, but hopes to have the project completed by the end of the summer.

The lights are just one part of the society’s plans to spruce up the historic neighborhood. Last year, member businesses swapped out their individual garbage containers for a single trash compactor that has leant itself to a cleaner alley. They also implemented a shared composter, where members can dispose of coffee grounds and egg shells and then take the resulting compost home for use in their own gardens.

This year, Teftsis — co-owner of Astoria and Redsmoke Barbeque — hopes to secure a plaque identifying Greektown’s place on the Federal Register of Historic Places through the U.S. Department of the Interior. “We’re planning a big Greek Octoberfest on Oct. 4, so we’ll see how much money we can raise from that to fund some of these projects,” he says.