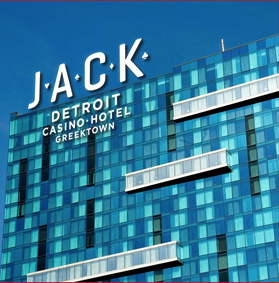 Rock Gaming LLC, the gambling subsidiary of Dan Gilbert’s Rock Ventures group of companies, today announced the company will be rebranded as Jack Entertainment, effective immediately. Greektown Casino-Hotel’s name will change to Jack Detroit Casino Hotel Greektown by the end of the year.

“We’re not forgetting our heritage at Greektown,” says Mark Dunkeson, president and COO of Rock Gaming. “Greektown’s an iconic property, but our intention is to run that business as we have since 2013. We just finished a $70 million renovation there. It will be a change for the city, but I think it will become a very positive change as Greektown becomes a part of a larger family of companies.”

“We needed a name that represents the true essence of our company,” says Darlene Monzo, chief marketing officer of Rock Gaming.

Matthew Cullen, CEO of Rock Gaming, says Jack Entertainment is a “bold initiative committed to urban revitalization” and would coincide with an investment in each of the company’s properties.

Greektown will be the fourth casino to re-brand.

“Jack” also comes with a loyalty reward card program that will cross over between the Ohio and Michigan properties.