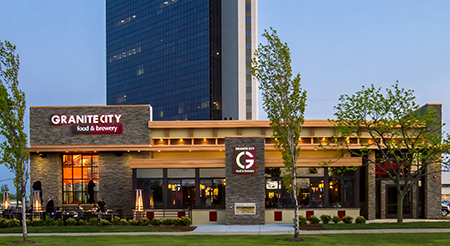 Construction is moving along for Minneapolis-based Granite City Food and Brewery’s second and third Michigan locations, with the opening in Northville Township in March followed by the Detroit’s Renaissance Center restaurant in the fall.

The most significant difference between the two restaurants will be the inclusion of a full-wraparound patio with about 25 to 30 tables, says Jeff Dean, vice president of operations for the restaurant and brew-pub. “It brings a little more personality and visibility to the building. It’s a cue that something is going on there.”

Within the RenCen, the 16,000-square-foot space will seat more than 450 patrons, with room for an additional 175 on the outdoor patio facing Jefferson Avenue.

“Our menu has a lot of Midwestern comfort foods, but with our own twist — it’s not just all meat and potatoes,” says Dean, adding that the menu evolves based on culinary and regional trends.

For instance, considering the big boom in craft brew appreciation, the Northville location will take a more collaborative approach to its tap setup. “We’ll have a combination of our beers and about eight or 10 local guest taps,” says Dean, noting that Granite City produces more than 20 beers under its brand name.

With more than 30 stores already, Granite City Food and Brewery has plans to open about four to five company-owned restaurants each year moving forward. Presently, with the exception of the company’s Washington, D.C. location, most sites are within a 400 to 500 mile radius of Minneapolis.

“We’re always looking for new sites,” Dean says. “We haven’t signed on any other (restaurants) in Michigan at this point, but our chief of development is a Detroit native, so he’s always looking here.”