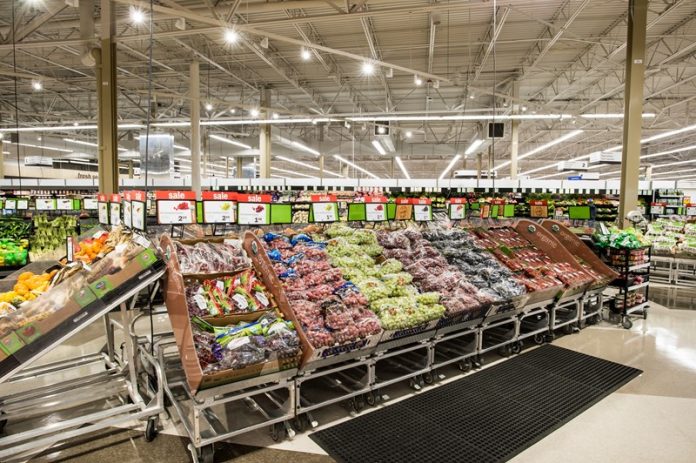 Grand Rapids-based Meijer announced Tuesday it plans to transition the interior lighting of all of its retail locations to LED by 2021 as part of its ongoing effort to increase sustainability. The company expects the change will reduce its lighting electrical use by as much as 50 percent annually.

This latest effort comes after other sustainability efforts, including the construction of energy-efficient buildings, use of a low-emission truck fleet, and selection of local and sustainable product offerings.

The LEDs will be supplied by GE, Cooper, and Phillips. Meijer plans to transition all in-store lighting, including ceiling and spotlight illumination, across its six-state footprint. LED lights are 70 percent more efficient, improve lighting quality, and have a lifespan of more than twice that of traditional lighting. Meijer introduced its first all-LED store in 2013 in Beavercreek, Ohio.

“Our Beavercreek location served as a great test that led us down the path to planning a full-chain transition across our six-state footprint,” says Rick Keyes, president and CEO of Meijer. “The lighting quality made possible by LEDs enhances the shopping experience for our customers and the work environment for team members, while significantly decreasing energy usage.”

The project launched in June with the company’s Michigan stores. Meijer will phase in other locations state-by-state, so the stores can remain open during the installation process.

Meijer has decreased its energy usage by 25 percent per square foot since 2005. Since 2007, all Meijer stores have been built to Leadership in Energy and Environmental Design standards.

In 2014, the company expanded its selection of energy-efficient light bulbs for customers by partnering with GE Lighting to redesign and expand its retail lighting aisle. GE Lighting used the space to launch its new line of LED bulbs while partnering with Meijer to educate consumers about LED technology.