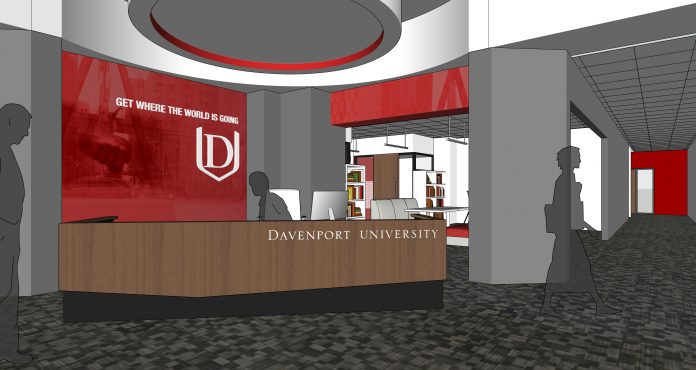 Grand Rapids-based Davenport University Tuesday announced its new Detroit campus will be at 3031 W. Grand Blvd. in Detroit. The new campus will be located on the first floor of Farbman Group’s New Center One building at W. Grand Boulevard and Second Avenue, and classes start in January 2019.

“With the new Detroit campus, Davenport is bringing the full force of the university to the city of Detroit,” says Richard Pappas, president of Davenport University. “I am confident that with Davenport University’s investment in the new Detroit campus, we’ll be able to advance the careers, skills, and opportunities for students and, as a result, produce a competitive advantage for the employers of Detroit.”

The new campus was built to serve more than 2,000 students per semester. Davenport has been engaged in the education of the greater Detroit community for more than 60 years and announced new partnerships with the city of Detroit and Wayne County earlier this year that provide scholarships to city and county employees, their spouses, and their dependents.

“For years, Davenport University has served Detroit residents, and having a campus right here in the city, close to major bus routes, will make a quality college education that much more accessible,” says Detroit Mayor Mike Duggan. “Davenport will be a great partner in our efforts to prepare Detroiters for opportunities in fields such as health care and technology.”

The Detroit campus will be located near bus stops and the QLine. The 12,000-square-foot space will offer six classrooms, a computer lab, and work and study areas. Enrollment is available now.

Students may attend classes at the Detroit campus, the Warren campus, or at University Centers in the Wayne County Community College District, at Schoolcraft College, and at Macomb Community College. Davenport also offers online classes.

Davenport was founded in 1866 and is a private, nonprofit university serving about 7,500 students. More than 60 undergraduate and graduate programs are offered through the colleges of business, technology, health professions, arts and sciences, and urban education.