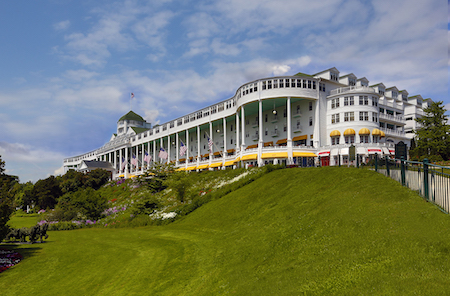 All renovations took place during the winter, with materials transported by boat and horse-drawn wagon, because motor vehicles are not allowed on the island. The three new suites were constructed on the hotel’s fourth floor, adding five dormers to Grand Hotel’s façade on the east end. When the project is completed, the roofline will look very similar to the original hotel, which opened in 1887. Additionally, Grand Hotel also renovated its 660-foot front porch over the last two years.

“This season will be the 85th season that a member of my family has owned and operated Grand Hotel,” says Dan Musser, III, Grand Hotel president. “That continuity of management has been a major part of maintaining the historic integrity of the hotel and the unique ambiance for which Grand Hotel is known.”

Grand Hotel will also host an anniversary celebration the weekend of June 30, treating guests to a presentation and question and answer session with Grand Hotel’s historian and Musser regarding the establishment’s 130-year history. Additionally, each guest will receive a copy of Inside the Grand Hotel, a one-hour documentary produced by Detroit Public Television and narrated by WJR-AM’s Paul W. Smith. The film offers a behind-the-scenes look at the hotel’s owners, caretakers, employees, and interesting spaces. The documentary debuted on March 1 at the Detroit Athletic Club, and will continue to air in Detroit and on PBS stations throughout Michigan.

IN RELATED NEWS, Musser will be the featured speaker at the Brother Rice Business Alliance Spring Networking Event on March 16 at the Bird and the Bread restaurant in downtown Birmingham. More information about the event, which is open to the public and runs from 5:30-8 p.m., can be found here.

Grand Hotel is open annually from May through the end of October.