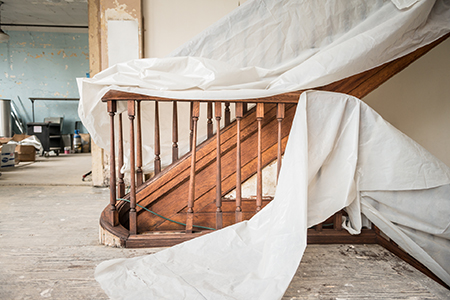 All four floors of Detroit’s Grand Army of the Republic Building — a castle-like structure at Grand River and Cass — will be open to the public on Nov. 8 for the first time since the historic building closed in 1982.

The “first-look” event comes three years after Sean Emery and Mindfield principals David and Tom Carleton purchased the property from the city of Detroit for $220,500. Since then, the trio has invested some $4 million in grants, tax credits, and personal funds to support the redevelopment of the facility, which originally served as a gathering place for Civil War veterans starting in 1899.

“This is the first and only time that the entire building will be open for (public) viewing and while it will not be 100 percent complete, attendees will get an idea of our vision for its transformation,” says David Carleton. “I think folks will see it the way that we do, a true testament to the juxtaposition of old and new.”

In addition to updating the building’s electrical, plumbing, and HVAC system, the redevelopment includes two restaurants — Republic Tavern and Parks and Rec Diner — on the first floor; event space on the second; office space on the third; and the headquarters of creative media studio Mindfield on the fourth floor and mezzanine, or balcony, level.

In addition to tours, live entertainment, and Civil War re-enactors, guests can sample menu items from both restaurants, which are expected to open by the end of the year.

Considering the history of the building, proceeds from the open house will benefit the metro Detroit-based Fallen and Wounded Soldiers Fund.

“Detroit’s Grand Army of the Republic building once played a very important role to the veteran community,” says Lynne Minish, treasurer of the Fallen and Wounded Soldiers Fund. “As an organization that serves the U.S. Armed Forces, we are elated to see a company investing so much time and financial resources into restoring this building to greatness.”

Tickets for the event range from $100 to $350. For more information, visit gardetroit.org/gala.