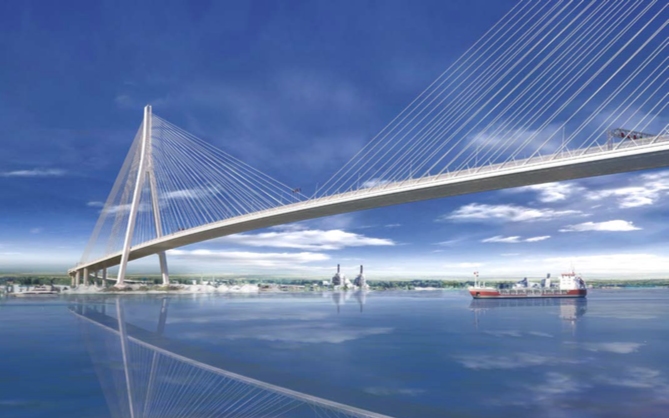 “This is an exciting day for Detroit, Windsor, Michigan, Ontario, the United States, and Canada,” says Snyder. “After more than seven years of hard work, today we broke ground on what will be a thriving legacy named for a legend. Gordie Howe represented the best of Canada and the United States. And, thanks to the hard work of many people on both sides of the border, now this bridge to the future will represent our prosperous partnership for generations to come.”

The new six-lane, cable-stayed bridge will provide direct connectivity to existing highway networks in Windsor and Detroit. Construction is expected to begin after financial close in the fall.

“Today’s milestone is an important step in the building of one of Canada’s top infrastructure priorities,” says Sohi. “Along with the recent announcement of the preferred proponent, the reveal of the bridge design, and the advance construction that has been happening on the Canadian side, it is clear that progress is well underway toward full construction starting this fall.”

The Windsor-Detroit Gateway is the busiest Canada-U.S. commercial land border crossing and is vital to the economies of Ontario, Michigan, Canada, and the U.S., with about 7,000 trucks crossing each day. About 2.5 million trucks cross the Windsor-Detroit border each year. In 2017, this represented more than $106.5 billion in bilateral trade.

Canada and the U.S. share the world’s longest secure border. About 400,000 people and $1.9 billion of goods and services cross the border daily.