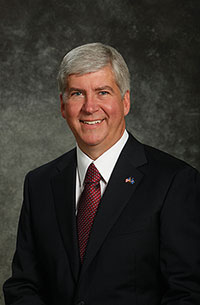 Michigan Gov. Rick Snyder today announced an investment mission to Europe, which will focus on strengthening trade relationships and attracting job-creating businesses investments, particularly in the aerospace industry. Snyder will meet with dozens of business and government leaders in Europe from June 17-23.

“Michigan is a model on the national and global stage in the convergence of manufacturing and technology, and I’m taking this opportunity to share firsthand with leaders in other countries what Michigan has to offer,” says Snyder. “As the leader in automotive research and design, we have a strong manufacturing base and a talented workforce. Those qualities are attractive to employers considering expanding in the United States, and I’m going to tell them why they should create those jobs in Michigan.”

Synder will begin his mission in Paris, meeting with executives from several French automotive companies, and aerospace executives during the International Paris Airshow. The event is more than 100 years old and is the largest and longest-running aerospace trade show worldwide.

Snyder adds that as the center of the North American auto industry, Michigan is uniquely suited to accommodate aerospace supply chain and engineering companies.

Following Paris, Snyder will head to Germany to connect with local and state government officials, and then Italy to meet with business executives. Officials from Macomb and Oakland Counties and representatives from Automation Alley, The Right Place, and the Michigan Economic Development Corp. will also participate in the trip.