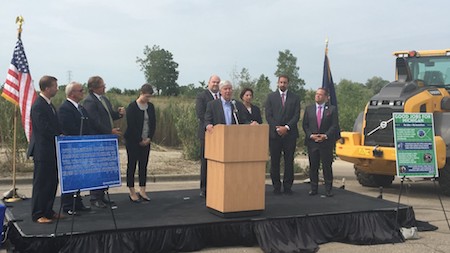 On an industrial property, just off of M-59 in Oakland County, Gov. Rick Snyder signed a three-bill package into law designed to diversify Michigan’s economy and attract new, large-scale employers. The bill has support from a bipartisan group of legislators from across the state, as well as economic development partners from each region and representatives of organized labor.

“The resurgence of Michigan as a manufacturing powerhouse is clear. We are prouder than ever of our thriving economy, our talented workforce and our low unemployment rate,” says. Gov. Snyder. “But we will not be complacent, as we were during the Lost Decade. Michigan needs to set the stage to grow entirely new industries and continue to diversify our economy. By now we know the realities of today’s economic environment and will do everything we can to remain the most competitive state for business and show the rest of the nation and the world that Michigan is the best place to create new jobs.”

Senate Bills 242-244, sponsored by Senator Jim Stamas, Wayne Schmidt, and Steve Bieda, respectively, will encourage new and emerging businesses with sizable workforces by allowing them to keep some or all of the state income tax paid by their employees if certain criteria are met. The incentives vary in amount and length of time according to the number of new jobs the qualifying business creates and whether it can meet or exceed regional average wage requirements.

To qualify, applicants must create at least 250 new jobs and pay salaries that are 125 percent or more of the prosperity region average wage. Businesses that meet the 500 or 3,000 job thresholds must pay wages equal to 100 percent of the prosperity regional wage. Qualifying 3,000 or more job and wage applicants are eligible to receive the maximum income tax capture for 10 years, the maximum length of time allowed under the legislation.

The bills were supported by a majority of Republicans and Democrats in both the state House and Senate. More information can be found here.