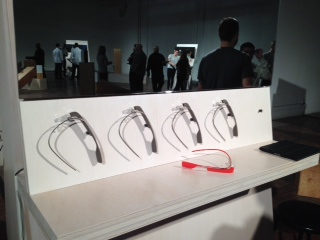 The first public demonstration of Google Glass in Detroit, held today at the Museum of Contemporary Art Detroit, was impressive, though the device had its hiccups. About 2,000 people are expected to visit MOCAD this weekend for public demos, the second stop of a national tour.

The device is easy to use once the screen is adjusted to your field of vision. By tapping the side of the device with a finger, a menu (timeline in Google parlance) appears. Options include “Take a picture,” or “Get directions to.” It also responds to voice commands. Here’s a recap of the demo:

“OK Glass, what time is the Red Wings game tonight?” In a couple of seconds, the Red Wings logo and the Washington Capitals logo appear on the screen, and below that, the device read 7:30 p.m. Mission accomplished.

“OK Glass, get directions to the Whitney restaurant.” Here the device struggled, even as the Whitney is located across Woodward Avenue from the MOCAD. While the options include driving or walking directions, the device couldn’t bring up a map. 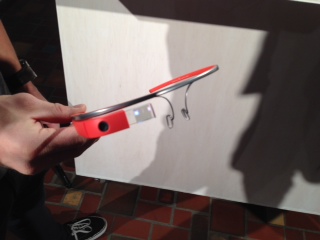 “OK Glass, get directions to Joe Louis Arena.” Again, the device struggled. While it recognized the command, it brought up a map that included Charleston Road. The Google rep suggested the device may be searching in North Carolina — the first public demo was recently held in the Research Triangle in that state.

“OK Glass, take a picture.” In a second, a photo of MOCAD’s interior space appeared on the screen. Following that, the device offered various options, including the ability to share on Facebook, Twitter, Google+, and several other social media offerings. It also can take video.

The device is what Google refers to as a “moonshot project.” It could go on sale next year, though pricing hasn’t been announced. A developer version of the frame goes for around $1,500. Other moonshot projects developed at Google’s lab include autonomous vehicles, indoor mapping, and Loon, where weather balloons in the atmosphere deliver Internet service to remote areas.

For more information on this weekend’s public demo of Google Glass, visit detroitthroughglass.splashthat.com.

Pictured at right: Google Glass is a hands-free computer device encased in a titanium eyeglass frame. Photograph by R.J. King.