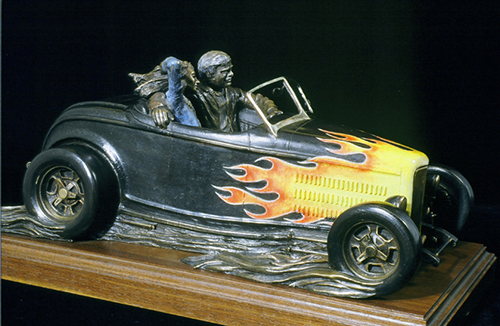 Next month, the Automotive Hall of Fame in Dearborn will open a temporary exhibition dedicated to the works of Alexander Buchan, the former chief design sculptor for General Motor’s Design Studio.

Driving Greatness: Bringing the Past into the Future will open Aug. 1 and run through Sept. 28, and include more than a dozen bronze sculptures by the artist from Warren. Highlights include the sculpture Dream Cruise – the 1932 Ford Highboy, which depicts a couple riding in a Ford roadster and will be displayed alongside the actual automobile that inspired the artwork.

“The Automotive Hall of Fame is honored to present the work of Alexander Buchan,” says William R. Chapin, president of the museum. “Our institution commemorates the remarkable people who have advanced automotive transportation to make ours a better world. Mr. Buchan’s sculptures seem to connect us in the present day directly to these special people, vehicles, and moments in time from automotive history.”

While working for General Motor’s Design Studio, Buchan — a graduate of Wayne State University, who has also taught at the College for Creative Studies in Detroit — took designers’ drawings and turned them into 3-D renderings in clay.

Today, Buchan works on commissions from his Michigan studio and has won numerous awards for his work as a sculptor specializing in automotive themes. In 2008, he received the David R. Hollis Award, recognizing the artist whose work best exemplifies the form and style of the automobile, at the 2008 Meadow Brook Concours d’Elegance.

On display at the Automotive Hall of Fame, at 21400 Oakwood Blvd., will be pieces depicting the Packard 905 driven by Ralph DePalma at Daytona Beach in 1919; the 1920 Indian Flexi Motorcycle driven by Floyd “Pop” Dreyer; and the 1959 Watson Roadster driven by Roger Ward at the Indianapolis 500.