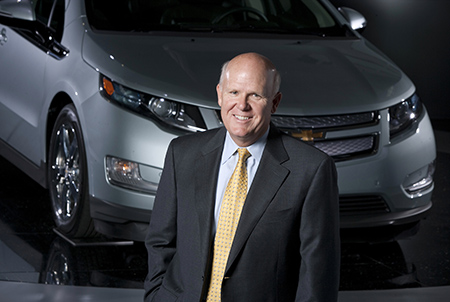 Dan Akerson will step down as General Motors’ chairman and CEO on Jan. 15, the automaker announced today. Succeeding him as CEO will be Mary Barra, the company’s executive vice president of global product development, purchasing, and supply chain. Taking over the role of chairman will be Theodore “Tim” Solso, former chairman and CEO of Cummins Inc.

“I will leave with great satisfaction in what we have accomplished, great optimism over what is ahead, and great pride that we are restoring General Motors as America’s standard bearer in the global auto industry,” Akerson said in a message to employees.

Akerson — who decided to pull ahead his succession plan by several months as his wife was recently diagnosed with an advanced stage of cancer — was named chairman and CEO on Sept. 1, 2010. Since the company’s IPO in November 2010, GM has recorded 15 consecutive quarters of profitability and has re-invested nearly $9 billion and created or retained more than 25,000 jobs at its U.S plants.

“My goals as CEO were to put the customer at the center of every decision we make, to position GM for long term success, and to make GM a company that America can be proud of again,” Akerson said. “We are well down that path, and I’m certain that our new team will keep us moving in that direction.”

Akerson’s successor, Barra, 51, has 33 years of experience at GM and has risen through a series of manufacturing, engineering, and senior staff positions.

“With an amazing portfolio of cars and trucks and the strongest financial performance in our recent history, this is an exciting time at today’s GM,” Barra says. “I’m honored to lead the best team in the business and to keep our momentum at full speed.”

The company also announced that Dan Ammann, executive vice president and CFO, has been named company president and will assume responsibility for managing the company’s regional operations around the world. The global Chevrolet and Cadillac brand organizations and GM Financial will also report to Ammann.

Ammann will retain CFO responsibilities at least through the release of the company’s fourth quarter and full-year 2013 results in early February 2014. His replacement as CFO will be named later.

“We have a significant opportunity to further integrate and optimize our operations to deliver even better results,” Ammann says. “While we have made good progress, we still have much work ahead of us to realize GM’s full potential.”

Steve Girsky, vice chairman of corporate strategy of business development and global product planning, will move to a senior adviser role until leaving the company in April 2014. He will remain on the board of directors.

“I share Dan’s pride for what the company has accomplished and his sense of optimism for a bright future,” said Girsky. “This team is united in its commitment to building on the foundation that we have established.”