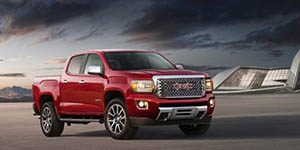 GMC today unveiled the 2017 Canyon Denali, a midsize truck with a chrome grille and 20-inch aluminum wheels, and the 2016 Sierra Denali Ultimate, a full-size truck with 22-inch wheels, ahead of the vehicles’ public debut at the Los Angeles Auto Show later this week. At the same time, Ford Motor Co. introduced the new Ford Escape with added driver-assist technologies and new mobile connectivity.

The new Canyon Denali, which goes on sale in late 2016, has aluminum wheels with painted accents, chrome fog lamp bezels, and a polished exhaust tip.

“Canyon is the segment’s first and only premium midsize truck, offering unparalleled capability and efficiency matched with maneuverability and refinement,” says Duncan Aldred, vice president of sales and marketing at GMC. “The all-new Canyon Denali builds on that award-winning combination with the distinctive styling, luxurious interior, and elevated content that has defined the Denali nameplate since its introduction nearly 17 years ago.” 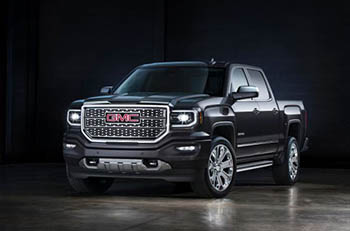 The 2016 Sierra Denali Ultimate, which goes on sale late in the first quarter of 2016, is offered as a four-wheel drive 1500 crew cab model. The truck comes standard with a sunroof and chrome tow hooks.

“The Sierra Denali has helped drive the growth of the premium portion of the light-duty crew cab segment,” Aldred says. “This truck is the ultimate expression of the Sierra Denali with greater emphasis on the bold and refined presence and advanced features that make Denali models synonymous with precision and exclusivity.”

Aldred says the vehicle has a 6.2-liter V8 engine that offers more than 400 horsepower and 460 pounds per feet of torque. The Sierra Denali has a wireless phone charging system, a remote vehicle starter system, and a rear-vision camera. The vehicle has a leather interior with contrast stitching and a heated, leather-wrapped steering wheel.

IN OTHER AUTO NEWS, The new Escape is the first Ford vehicle to have Sync Connect, an app that allows drivers to remotely unlock doors, check the vehicle’s fuel level, and locate where the vehicle is parked. 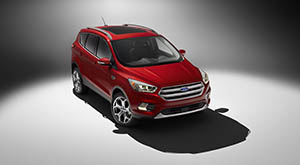 “The compact SUV segment is the largest and most competitive in the United States, and the new Escape delivers even more of what our customers want — more technology they can really use to make their daily drive safer and easier,” says Joe Hinrichs, president of Ford of The Americas.

Hinrichs says the new Escape includes adaptive cruise control, forward collision warning with brake support, a lane-keeping system, and enhanced active park assist. The vehicle also has safety features such as a blind spot information system that alerts drivers when they enter a defined blind spot and hill-start assist, which holds the vehicle stationary on a hill long enough for the driver to transition from brake to gas pedal.

The new Escape has a two-liter engine that delivers nearly 250 horsepower and 275 pounds per feet of torque. â€‹