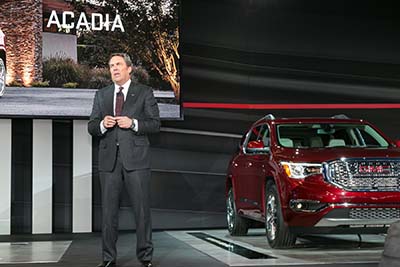 GMC today introduced the 2017 Acadia, a lighter, more powerful midsize crossover compared with previous generations. The vehicle goes on sale in the spring.

“Acadia offers everything customers want in a crossover, with three rows of seating on most models,” said Mark Reuss, executive vice president of global product development, purchasing, and supply chain, at the 2016 North American International Auto Show. “The 2017 Acadia is lighter, more capable, and more fuel efficient while getting stronger and safer.”

Depending on the model, the crossover is available with five-, six-, and seven-passenger seating. He said the new Acadia is 700 pounds lighter than the current model, with a 2.5-liter engine that gets an estimated 28 miles per gallon on the highway.

The vehicle offers new features such as a split-folding second-row seat, a third-row seat that folds flat, a rear center console with a pullout storage drawer, and USB charge ports for all three rows.

Additionally, the exterior of the Acadia features a chrome-trimmed grille, wraparound rear side windows, and squared off and flared wheel arches.

“After six years of sales growth for the Acadia, GMC is more than a pickup brand,” said Duncan Aldred, U.S. vice president of Buick-GMC sales. “Crossover and SUV sales accounted for a little more than 50 percent of GMC sales last year. In 2015, there were 96,000 sales of Acadia in the U.S.”