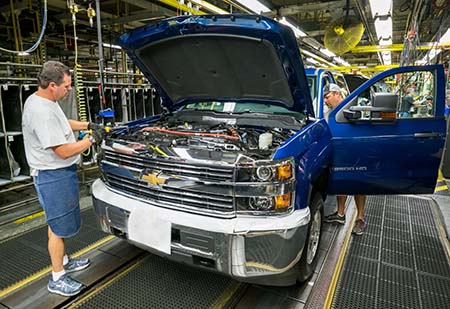 General Motors Co. today announced plans to invest $877 million to build a new body shop facility at its Flint Assembly Plant, a popular destination for pickup truck customers who want to watch their vehicles being built.

“This investment will allow us to use a more innovative approach to deliver material between two critical facilities, reducing handling and the time it takes to ship parts,” says Cathy Clegg, vice president of North America manufacturing and labor relations for GM.

Clegg says the investment will also cover improvements to the general assembly area inside Flint Assembly, as well as the installation of new equipment at the plant.

Since 2011, GM has announced investments totaling more than $1.8 billion for Flint Assembly. About $600 million went to plant upgrades and a new paint shop that will open in 2016.

The GM Flint Assembly plant, which opened in 1947, has produced more than 13 million vehicles. The plant allows customers to see their heavy-duty Silverados or heavy-duty Sierra trucks being assembled and roll off the line.

“In the last several years, GM’s investments in the city of Flint have topped $2.5 billion, creating hundreds of construction jobs and an economic boost for the community,” says Dayne Walling, mayor of Flint. “This investment not only strengthens the ties between GM and the city, it demonstrates that Flint continues to play an important role in the resurgence of manufacturing in Michigan and the rest of the United States.”

IN RELATED GM NEWS, Chevrolet announced details about the all-new, second-generation 2016 Volt, which delivers 53 miles of electric range, a 40 percent improvement over the first-generation Volt.

“We listened to our customers,” says Andrew Farah, chief engineer of the Volt. “They were very clear when they told us that they wanted more range, and a fun driving experience behind the wheel.”

When the Volt’s battery runs low after 53 miles of driving, a gas-powered generator extends the driving range for a total of 420 miles on a full tank. Farah says the vehicle gets 42 miles per gallon. Pricing for the 2016 Chevy Volt starts at nearly $34,000.