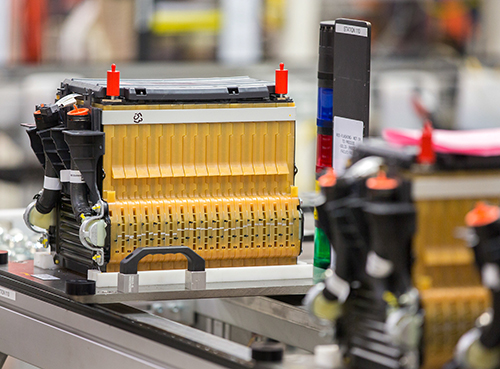 General Motors Co. today announced it will produce the battery systems for the 2015 Chevrolet Spark EV at its Brownstown Township facility, which also manufactures battery packs for the Chevrolet Volt, Opel Ampera, and Cadillac ELR.

“Using our in-house engineering and manufacturing expertise enabled us to deliver a battery system that is more efficient and lighter than the 2014 Spark EV without sacrificing range,” says Larry Nitz, executive director of GM global transmission and electrification engineering.

The newly designed battery system features an overall storage capacity of 19 kWh and uses 192 lithium-ion cells, which are produced at LG Chem’s plant in Holland. The battery system’s weight of 474 pounds is 86 pounds lighter than the system in the 2014 model.

Like the 2014 model, the new Spark — currently on sale in California and Oregon — achieves a 119 MPGe, or gasoline equivalent, and claims an 82-mile range.

“Our successful working relationship with LG Chem has allowed us to deliver a new battery system for the Spark EV that helps us to better leverage our economies of scale,” Nitz says.

Brownstown Battery Assembly started mass production in October 2010 and is the first high-volume manufacturing site in the U.S. operated by a major automaker for automotive lithium-ion battery production.