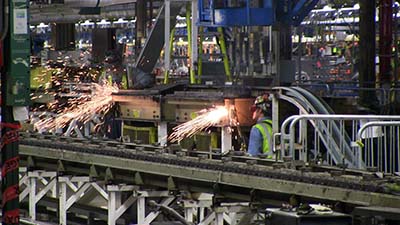 General Motors announced today the automaker will double its workforce at its Detroit-Hamtramck Assembly plant by adding a second shift and hiring more than 1,200 hourly and salaried jobs.

“This is the result of the award-winning vehicles Detroit-Hamtramck produces and the confidence GM has in our team to build world-class quality for our customers,” says Gary West, plant manager of the assembly plant.

The addition of a second shift will increase the plant’s workforce to about 2,800 employees when hiring is completed. GM officials says the second shift is necessary to meet the forecasted market demand for the five cars produced at the assembly — Chevrolet Volt, Impala, and Malibu, Cadillac ELR, and Cadillac CT6 beginning early next year.

The 4.1 million-square-foot assembly plant, which spans both Detroit and Hamtramck, opened in 1985. GM has invested $1 billion in the plant over the last six years. The factory is one of the automaker’s most complex plants in North America, building five models on one production line.

In 2014, GM invested $384 million at Detroit-Hamtramck Assembly for new body shop tooling, equipment, and additional plant upgrades to build the Chevrolet Volt in preparation for the next generation of electric vehicles and advanced battery technologies.

Hiring is underway at the plant, and the shift is scheduled to begin operations early next year.