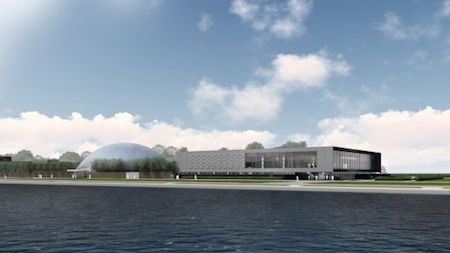 General Motors Co. today announced it will build a 360,000-square-foot expansion of its design studios at its Global Technical Center in Warren, a National Historic Landmark site. The project is the final stage of a multiyear $1 billion investment in the automaker’s technical campus.

GM will break ground in mid-2018 on the new studio building, which will surround the Design Dome Auditorium and viewing patio, and connect to the existing Design Center.

A two or three year project, the new building’s footprint first requires the completion of a new parking structure currently underway at the southwest corner of the Tech Center campus, bounded roughly by Mound, 12 Mile, and 13 Mile roads, as well as Van Dyke Avenue.

“We can only begin to predict how mobility will change in future generations,” says Michael Simcoe, vice president of Global Design. “Investing in our creative and skilled team and providing them with inspiring, modern spaces, new technologies, and more ways to work together will foster innovation that leads to real solutions for customers.”

The Tech Center campus opened in 1956 and was designed by architect Eero Saarinen and landscape architect Thomas Church to serve as a hub of engineering, design, and advanced technology. It was named a National Historic Landmark in 2014 by the U.S. Department of the Interior and the National Park Service.