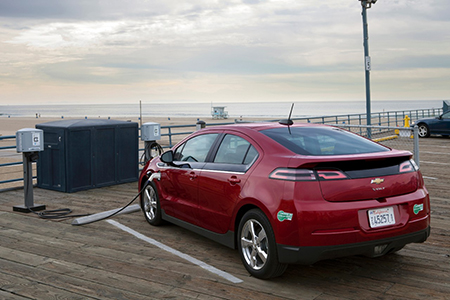 General Motors announced today production of the electric drive unit for the second-generation Chevrolet Volt — which allows the vehicle to drive in pure electric or extended range electric mode — will be moved from Mexico to the company’s transmission plant in Warren.

The assignment means most major Volt powertrain components will be made in Michigan, establishing the state as the company’s global engineering center for vehicle electrification, say company officials.

“We must provide the breakthrough technology that our customers want,” says Mary Barra, GM’s CEO, who will announce details on the move as well as capital investments of nearly $300 million in Michigan, at a meeting today at the Detroit Economic Club. “Our investments in the Chevy Volt and Michigan signify our commitment to lead the industry in technology and innovation.”

Both the Chevrolet Volt and Cadillac ELR are assembled at GM’s Detroit-Hamtramck assembly plant, while the battery cells for both vehicles are produced by LG Chem in Holland. GM’s Flint Engine Operations will build the 1.5-liter, four-cylinder range extender for the Volt.

Nearly 70,000 Volts have been sold since the plug-in electric vehicle first launched in 2010.