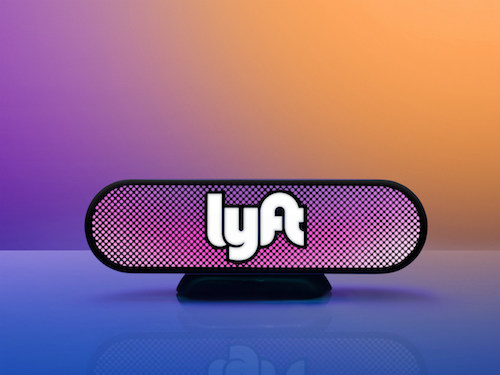 Nearly a year after Detroit-based General Motors Co. announced it would invest $500 million in Lyft, the San Francisco-based ridesharing service company has unveiled a device, called Amp, which is designed to help passengers and drivers identify one another at pickup.

Company officials say Amp is the rideshare industry’s first in-car connected device. The front of the device features ambient lighting, which is visible in windshields, and the back has a hidden screen that displays messages pushed through a Bluetooth connection.

Instead of relying on a pink mustache — Lyft’s previous method of distinguishing its vehicles — passengers can find their requested driver by matching the color shown in their Lyft app to that displayed on the Amp device.

“With the introduction of Amp comes the retirement of Lyft’s beloved pink mustache, which has evolved from the fuzzy Carstache on car grilles, to the sleek Glowstache dashboard ornament,” says Ethan Eyler, head of Ride Experience at Lyft. “Both paved the way for Amp, which will sit on dashboards, illuminating the streets with an iconic glow while better connecting drivers and passengers.”

As part of its announcement for Amp, Lyft also revealed its latest brand campaign, Ride on the Bright Side. Set to run through the end of this year, the campaign was created to highlight the friendliness, safety, and efficiency of Lyft’s service while also showcasing the rideshare industry’s competitive landscape.

Key elements of the GM and Lyft alliance include the joint development of a network of on-demand autonomous vehicles, GM serving as the preferred provider of short-term use vehicles to Lyft drivers through rental hubs in various cities in the U.S., Lyft drivers and customers receiving access to GM’s portfolio of cars and OnStar services, and the two companies providing each other’s customers with personalized mobility services. GM also holds a seat on Lyft’s board of directors.

Lyft, founded in 2012, is a competitor of Uber, another ride sharing platform. Lyft is available in more than 200 cities, including Detroit, and has averaged more than 7 million rides per month.