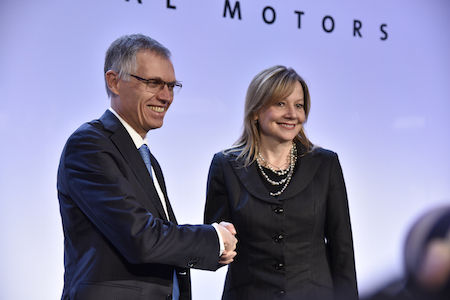 Detroit automaker General Motors Co. today announced the close of a $2.2 billion sale of their Opel and Vauxhall brands to Groupe PSA, making the French auto manufacturer the second largest car manufacturer in Europe with a 17 percent market share.

The finalized deal, which was announced earlier this year, officially marks the end of GM’s European market presence. GM officials say the sale will allow them to strengthen their immediate financial performance, while also preparing for the future in a changing industry.

“We’ve taken another bold step in our ongoing work to transform GM,” says GM president Dan Ammann. “This transaction allows us to sharply focus our resources on higher-return opportunities as we expand our technical and business leadership in the future of mobility.”

Exiting the European market could be a sign of GM shifting their attention from global production to incorporating electrification. During 2016, GM produced 11 vehicle models with electrification, and expanded their operations in their car-sharing service, Maven.

IN RELATED NEWS, General Motors today reported July U.S. retail sales of 202,220 vehicles, down about 14 percent from strong sales in July 2016. In July, GM’s crossovers and trucks accounted for 80 percent of sales for the company’s best monthly mix ever.

While the U.S. market continues to moderate, sales of GM’s newest crossovers were strong in July:

GM’s July incentive spending as a percentage of average transaction prices (ATP) was 11.5 percent, more than 1 full percentage point below the industry average, and 0.5 percentage points below GM’s 2016 calendar year average. GM’s ATPs were about $36,000, up nearly $1,000 from July 2016.

“We have strategically decided to reduce car production rather than increase incentive spending or dump vehicles into daily rental fleets,” says Kurt McNeil, U.S. vice president of sales operations. “We are working hard to protect the residual values of our new products and growing quality retail and commercial sales, and July’s ATPs reflect that discipline.”

GM’s U.S. commercial vehicles sales were up 40 percent from last July, the best July since 2007, led by strong large van sales (up 89 percent), small utilities (up 61 percent), and large pickup sales (up 21 percent). Year to date, GM commercial sales are up 11 percent. U.S. daily rental sales were down more than 11,200 vehicles or 81 percent in July, as planned. In July, GM’s daily rental sales accounted for only 1 percent of GM’s total sales. GM continues to have the lowest U.S. rental mix of any full-line automaker at about 7 percent of total sales year to date.