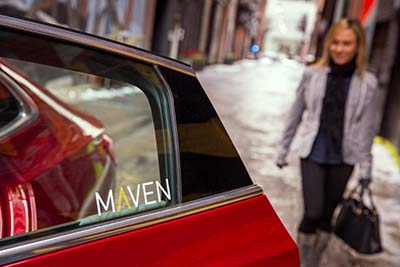 General Motors today announced its new car-sharing service, called Maven, after buying the technology and employees from Sidecar, a ride-sharing service. Earlier this month, GM invested $500 million in Lyft, a competitor of Uber.

Maven will begin offering a car-sharing program to more than 100,000 people in Ann Arbor, initially focused on serving University of Michigan students and faculty. GM vehicles will be available at 21 parking spots in the city.

“With the launch of our car-sharing service through Maven, the strategic alliance with ride-sharing company Lyft, and building on our decades of leadership in vehicle connectivity through OnStar, we are uniquely positioned to provide the high level of personalized mobility services our customers expect today and in the future,” says Dan Ammann, president of GM.

He adds Maven customers will use an app to search and reserve a vehicle by location or car type and unlock the vehicle with their smartphone. He says the app also enables remote functions such as starting, heating, or cooling.

Ammann says Maven, which includes 40 employees from companies such as Google, Zipcar, and Sidecar, will launch more city-based programs later this year. He says Maven will launch a car-sharing service for Chicago residents in partnership with Magellan Development Group, and will expand its existing residential program in New York City.

Other initiatives include a peer-to-peer car-sharing program in Germany, and programs on GM campuses in the U.S., Germany, and China.

“With more than 25 million customers around the world projected to use some form of shared mobility by 2020, Maven is a key element of our strategy to changing ownership models in the automotive industry,” says Julia Steyn, vice president of urban mobility programs at GM.

Total Chevrolet sales were up 5 percent in 2015 when compared year over year. Cadillac sales grew by 8 percent compared to 2014.