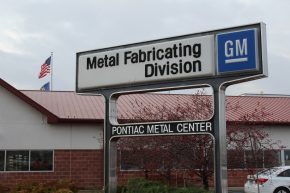 General Motors Co. today announced it will spend $5.4 billion to improve its U.S. plants, with $783.5 million toward three Michigan operations.

“The common thread among our investments is the focus on product improvements that benefit customers,” says Cathy Clegg, vice president of GM North America Manufacturing. “Together with our UAW partners, we’re working hard to exceed consumers’ ever-increasing quality expectations.”

The upgrades include $520 million for tooling and equipment for future new vehicle programs at the Lansing Delta Township assembly plant, and $139.5 million for a new body shop and stamping facility upgrades in Warren.

In a bid to improve overall quality, Clegg says all major body panel dies will be pre-tested at General Motors’ Pontiac metal center, which will enable stamping plants to produce parts faster. To that end, the automaker will invest $124 million in the center.

GM will detail the remaining $4.6 billion in investments and identify plants involved over the next several months.

Since June 2009, the automaker has announced U.S. facility investment of approximately $16.8 billion. About $11.4 billion of that has come since the 2011 UAW-GM National Agreement. Clegg says the investments have created 3,650 new jobs and secured the positions of approximately 20,700 others.