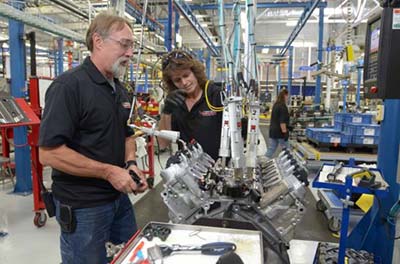 “Coupled with the investment for $439 million for a new paint shop and facility upgrades announced in May, GM has committed $483 million to Bowling Green this year alone,” said Kai Spande, plant manager at Bowling Green Assembly.

Spande says the expansion is due to the success of the Corvette Z06, which has a 6.2-liter aluminum V8 engine that delivers 650 horsepower and 650 pounds per feet of torque. The Corvette Z06 accounts for nearly a third of all Corvettes produced at Bowling Green Assembly.

The plant’s performance build center offers a “Build Your Own Engine” program that provides customers the opportunity to assemble a 650 horsepower engine for their new Corvette. The $5,000 package includes a full day with a Performance Build Center engine assembly technician who oversees the build, along with a personalized engine plaque that identifies the customer.

Spande says over the last four years, GM has added more than 300 jobs and has invested a total of nearly $618 million at the plant.