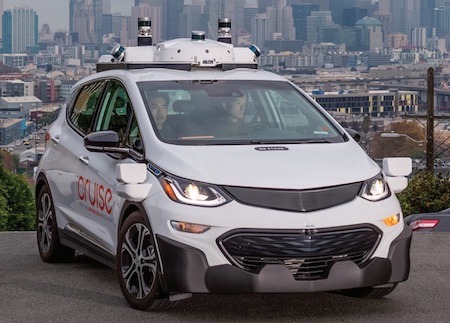 Detroit automaker General Motors Co. today announced the filing of a safety petition with the U.S. Department of Transportation for its fourth-generation self-driving Chevrolet Cruise AV, the first production-ready vehicle built from the start to operate safely with no driver, steering wheel, pedals, or manual controls. Per the report, the company plans to safely introduce self-driving cars to roads by 2019.

The Cruise AV is also capable of seeing the environment around it, 360 degrees during day and night conditions. Its designed to identify pedestrians in a crosswalk or an object darting into its path and respond accordingly and can maneuver through construction cones, yield to emergency vehicles, and react to avoid collisions.

“By integrating our self-driving system into the vehicle from the beginning, and through close coordination between the hardware and software teams, we have evaluated potential failure modes for all systems, and addressed them throughout development to ensure a safe and reliable product,” the report adds. “This comprehensive, integrated approach to safety, combined with testing in one of the most complex environments in the world, allows us to safely take the next step — elimination of the steering wheel, pedals and other manual controls — from the vehicle.”

The report also addresses cybersecurity, which protects the self-driving system and other critical vehicle components from malicious interference and supports customer confidence in GM’s vehicle operation and use. GM works with other third parties to maintain and advance cybersecurity capabilities, guidelines, and standards, including a variety of “mitigating controls” like device registration, message authentication, secure programming and diagnostics, intrusion detection, and prevention systems. Cruise AV also has two data recording features designed to be fail-operational and keep data intact even if a crash occurs.

The Cruise AV was designed to comply with federal, state, and local laws and motor vehicle safety standards, as well as non-traffic related state and local laws like insurance requirements, reporting minimums, and others.

A full version of the report can be found here.