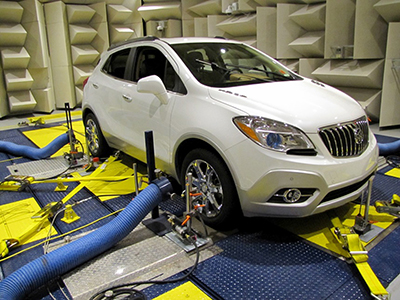 Following the recent opening of General Motors’ new brake testing facility at the GM Proving Ground in Milford, the automaker’s engineers are on a mission to eliminate annoying brake noise.

“The concept of a silent brake is actually very complicated,” says Brent Lowe, GM’s performance engineer for brake noise development. “Braking creates friction, and the more friction present amounts to more noise. Though the sound of brakes squealing is something every driver can easily identify as a nuisance, it is one of the more difficult things to actually remove.”

Before the new facility, the team had to rely on test-driving vehicles at the track and a two-wheel drive chassis dynamometer that offered far less control over humidity and temperature, Lowe says.

“With our previous methods and equipment, we became really good at finding and mitigating approximately 85 percent of existing brake noises,” he says. “With this new facility, we’ll be able to locate and address the remaining 15 percent of brake noise frequencies so that we can continue to be leaders in the industry.”

The 14,000-square-foot facility — which can operate 24 hours a day — allows engineers to simulate underbody airflow and access a brake chassis dynamometer, which can simulate braking in weather conditions that range from Alaska to a tropical island. The soundproof test chamber can accommodate vast changes in climate and moisture conditions as well as dramatically alter its temperature within about 15 minutes.