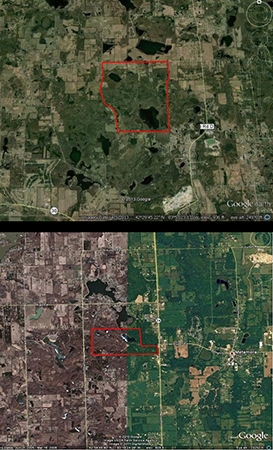 The Girl Scouts of Southeastern Michigan have put two of its properties up for sale: Camp Innisfree in Howell and Camp Metamora in Metamora.

“We’re not getting out of the camping business, we’re just consolidating our efforts in campsites overall,” says Bill Sengstock, facilities director for the Girl Scouts of Southeastern Michigan. “This is a result of overcapacity (due to) a merger that occurred in 2009. There were four councils that merged, so all of a sudden instead of everybody having one camp, we had six.”

Sengstock says the organization, which serves more than 38,000 girls and adults in Oakland, Macomb, Genesee, Lapeer, St. Clair, Sanilac, and parts of Wayne, Monroe, and Livingston counties, will continue to provide camping opportunities at Camp Hawthorn Hollow in Columbus and Camp Playfair in Lexington, both in the Thumb.

In the meantime, Insite Commercial, a real estate company based in Commerce Township, is marketing the properties on behalf of the Girl Scouts. The firm has already received several inquiries regarding the redevelopment of Camp Innisfree, at 2005 W. Schafer Rd., into a retreat or resort, says Randy Thomas, Insite’s president and CEO.

“Innisfree is a 994-acre parcel — it’s very unusual to have that large of a contiguous parcel in southeast Michigan,” Thomas says “There are two private lakes on the property as well as a state-of-the-art equestrian facility. We’ve had a few inquiries about utilizing (the equestrian) facility.”

With an asking price of nearly $10.2 million, or $10,250 per acre, the Howell property has seven miles of roads, three miles of trails, and buildings that could potentially be used for lodging, dining halls, and classrooms.

The asking price for the 304-acre Camp Metamora is listed at $4.4 million, or $14,284 per acre. All of the buildings have been demolished, and Insite is marketing it as vacant land.

For more information about the properties, visit insitecommercial.com.