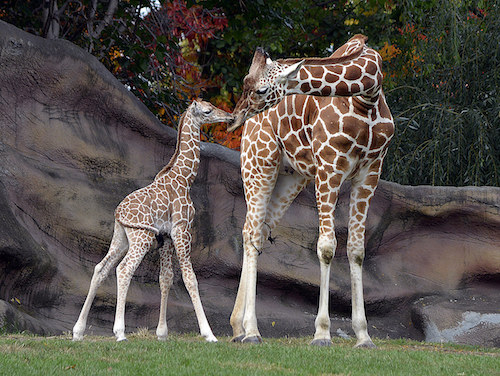 Longtime Detroit Zoo supporters Edsel and Cynthia Ford have provided a $1-million gift to benefit the giraffe habitat. The funds, announced today, will be used to expand the animals’ indoor habitat.

“There have been so many significant improvements made at the zoo in recent years, and our family is happy for the opportunity to foster that growth,” says Cynthia Ford, a member of the Detroit Zoological Society board of directors.

“We have a special fondness for these graceful, elegant animals,” says Edsel Ford, a board member of Ford Motor Co. in Dearborn. “This growing family needs a larger home and we were drawn to the idea of creating an environment where they can all gather in one space.”

Renovations will double the giraffes’ interior space, including the addition of a large area for the entire herd to be together. The work is expected to be completed by late spring.

“Cynthia and Edsel Ford have been extraordinary supporters of the Detroit Zoo for many years and we are extremely grateful for this generous gift,” says Ron Kagan, executive director and CEO of the Detroit Zoological Society. “There is growing conservation concern with wild giraffe populations.”

The International Union for the Conservation of Nature last week declared giraffes — the world’s tallest land mammal — officially in danger of extinction. Giraffe numbers have plummeted in the wild by more than 40 percent in recent decades, resulting in the species moving to the “Vulnerable” category on the IUCN Red List.

With an annual regional economic impact of more than $100 million, the Detroit Zoo in Royal Oak is one of Michigan’s largest paid family attractions, hosting more than 1.5 million visitors annually. Its 125 acres of naturalistic habitats are home to 2,400 animals representing 255 species.