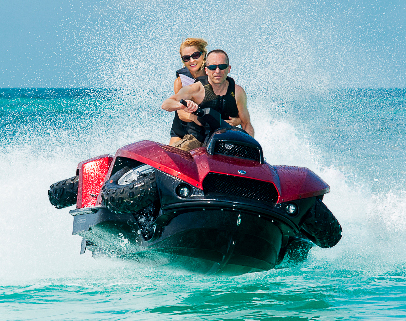 Auburn Hills-based Gibbs Sports Amphibians will release its 2014 Quadski, a vehicle that can traverse both land and water, to dealerships later this month. Joining it will be the Quadski XL, which — as the name suggests — is larger than the original.

At 11.6 feet, the Quadski XL, about a foot longer than the Quadski, provides room for a second rider and increased storage capacity for a second helmet and safety gear. Its curb weight of 1,437 pounds is about 100 pounds heavier and its wheelbase of about 6.9 feet is nearly a foot longer.

“Quadski attracted crowds at auto, boat, and power sports shows throughout the U.S. last year,” says Noel Lane, president and CEO of Gibbs. “We expect to build on that success with the addition of our new Quadski XL — a two-seater that research indicates will be popular with an even greater number of prospective buyers.”

The two models utilize patented water-jet technology and are equipped with a 1.3-liter BMW Motorrad engine and transmission. Producing 140 horsepower, the four-cylinder, water-cooled engine enables the Quadski and Quadski XL to reach speeds of 45 mph on both land and water.

“Our high-speed amphibians feature a unique retractable suspension system that provides a superb ride and nimble handling on land, and retracts in seconds after entering water,” Lane says. “It’s a patented design that allows Quadski to transition between the two environments in less than five seconds.”

Gibbs notes that his companies have more than 300 patents and patents pending and have invested more than $220 million in product and technology development.

“Bringing the Quadski to market in the U.S. over the past 18 months has been a long, uphill battle, but clearly worth the effort,” he says. “We expect the Quadski to pave the way for a host of other Gibbs amphibians that are in our pipeline and designed for consumers, sports enthusiasts, law enforcement agencies, and first responders in the years to come.”

The Gibbs Quadski, which has a suggested retail price of $41,125, can be found in dealerships in Michigan, and 14 other states. The XL carries a suggested price tag of $47,650.