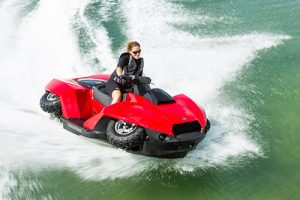 Gibbs Sports Amphibians in Auburn Hills, which produces the Quadski that traverses land and water at speeds of up to 45 mph, announced today it is doubling the size of its dealer and distribution network by 2015. The company currently has 16 U.S. dealerships with 21 retail outlets in 11 states, including Michigan.

In the near future, the company will add outlets in Europe, Asia, Africa, South America, and the Middle East. Already, established outlets include Argentina, Germany, Japan, Korea, Portugal, Russia, and Saudi Arabia. Gibbs began to export Quadskis, which can transition between land and water in less than five seconds, last December. First production models were launched in October 2012.

“Consumer interest in the Quadski and our other high-speed amphibian products has been exceptionally strong from day one,” says Alan Gibbs, the company’s founder. “We have as many as 23,000 visitors per day on our website, many of them from outside of the United States. As more people get the opportunity to see these high-speed amphibians in action, that interest will continue to grow.”

The Quadksi’s patented technology includes water jets that are lighter and more compact than standard marine-industry jets, along with a unique retractable suspension system. A K1300 BMW Motorrad engine powers the vehicle.

Gibbs Amphibians is a privately held company founded by Gibbs and Neil Jenkins in 1999. It consists of two divisions, Gibbs Sports Amphibians, which designs and manufactures consumer sports amphibians such as the Quadski, and Gibbs Amphitrucks, which develop commercial amphibians for first responder, humanitarian, and military use.

In related news, the Quadski will air in a Top Gear challenge race at 8:30 p.m. (EST) Monday on BBC America. Additionally, the Quadski, which is 10.5 feet in length, 5.2 feet in width, and 4.3 feet in height with a wheelbase of 5.8 feet, will be on display at the Detroit Boat Show at Cobo Center, which starts Saturday and runs until Feb. 23. The vehicle is priced around $40,000.