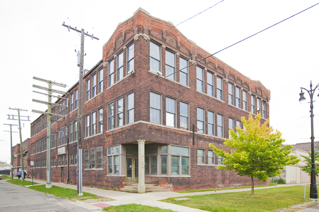 A development team from Munich has acquired a collection of four industrial warehouse buildings at Second Avenue and York Street in Detroit’s Midtown district, just south of Next Energy. The group plans to convert the structures into a mixed-use development of residential lofts, retail spaces, rooftop gardens, and green alleys.

“It’s very exciting to see a development group with an eye for great design, and a unique approach developing the site,” says James Tumey, a senior commercial and residential real estate agent at The Loft Warehouse in Detroit’s Eastern Market, who represented the buyers.

“When complete, the developments at Second and York will help fill the gap between Midtown and New Center, and create a more seamless and walkable environment. Plans are not finalized, but there is potential for about 80 new residential lofts in total, and the discussion for condos or rental apartments is still in progress.”

In November 2015, the development group acquired the historic Charles J. Trombly House at 553 E. Jefferson Ave. (sometimes referred to as the Beaubien House). Built in 1851, the townhouse-style, red brick structure near the Renaissance Center is being outfitted as offices for startups and small businesses.

In turn, Optima Aegidius has an offer on the now closed Big Book Store at Cass Avenue and Antoinette Street in north Midtown that is owned by John King, owner of John King Books in downtown Detroit and Ferndale. If the deal closes (listed for $1.2 million), the 14,000-square-foot, two-story structure would be converted into roughly 20 loft-style condominiums or apartments.

The Midtown industrial structures include: