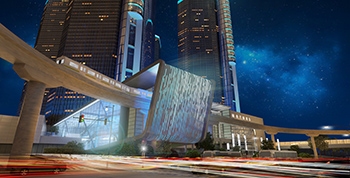 General Motors Co. has made significant progress on the design work for a major renovation of its global headquarters at the Renaissance Center, DBusiness has learned. The new space, to be called GM Experience, will span four levels at the northeast corner of the RenCen in space that, in some areas, was never utilized since the complex opened in 1977.

GM Experience will include the automaker’s latest models, some of which will spin on a large turntable set around the central support columns in the lower level of the RenCen, complemented by large LED screens. The automaker also is removing a seating area in the food court in the lower level and repositioning it with a large interactive lounge set around the vehicles to make it more inviting and interactive, especially for impromptu meetings.

The exterior walls and portions of the ceilings in the four-level space also will be opened up. Large exterior windows along the northeast side of the complex fronting Jefferson Avenue will be installed so that when the People Mover rolls by riders can see directly into the new space. It can also be viewed at street level.

As part of the work, GM will add an 8,000-square-foot addition that will extend the section of the complex which houses the People Mover station to Jefferson Avenue. The overall renovation is being designed by Neumann/Smith Architecture, which has offices in Detroit and Southfield, and EWI Worldwide in Livonia.

GM Experience also will include an energetic space that highlights the inventions and innovations the company has introduced since its founding in 1908, including the first mechanical heart pump it developed in 1954 with Dr. Forest Dodrill, a surgeon at Wayne State University’s Harper Hospital in Detroit, as well as the lunar roving vehicle it worked on with NASA for the Apollo 15 mission in 1971. GM worked on all of the mobility systems and components for the so-called “moon buggy.”

Overall, the 110,000-square-foot GM Experience will highlight the automaker’s past, present, and future, especially as it relates to the automaker’s ongoing work on new mobility platforms, says Nicole Jankowski, a GM world marketing manager who provided remarks on the project this week at the Downtown Detroit Partnership’s Stakeholder’s Meeting at the RenCen.

GM Experience is scheduled to open in late 2018 or early 2019, and will include a large exterior LED screen overlooking Jefferson Avenue. In recent weeks, the automaker has been working with city officials on the exact size of the screen.

In turn, on Thursday, the automaker will open a store offering branded apparel, framed prints, small car models, and other merchandise that highlights its brands like Cadillac, Chevrolet, Buick, and GMC.

The GM store will be located on the second floor of the RenCen Wintergarden that was formerly occupied by Jos A Bank. GM also is eyeing the addition of a GM store at its Warren Technical Center, most likely on the first floor of the former Lowe Campbell Ewald building it acquired in 2014 along Van Dyke Avenue. The building is located across the street from one of the main entrances to the Tech Center.

A limited number of other GM stores may be opened, as well.