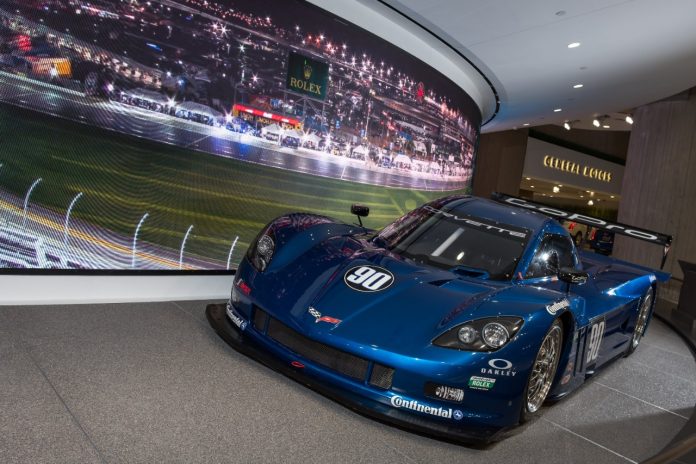 Detroit’s General Motors Co. today announced it has opened a display of a dozen modern and vintage racing vehicles and pace cars from across the motorsports spectrum in GM World, a new display area at its world headquarters at the Renaissance Center.

The display will be open to the public ahead of the June 1-3 Chevrolet Detroit Grand Prix.

“The new display in GM World celebrates one of the richest histories in motorsports,” says Tim Mahoney, chief marketing officer of Global Chevrolet and GM global marketing operations leader. “With the Chevrolet Detroit Grand Prix only a few days away, it offers a great reason to visit the Renaissance Center before heading to Belle Isle for the races.”

GM World is open to the public and fills the five-story atrium of the Renaissance Center. It includes vehicle displays, LED information screens, and a vehicle turntable around the atrium’s center column. Specialists are on-hand to answer questions.

Featured vehicles in the motorsports display include:

Additional vehicles are expected to be added this summer. The display also includes racing engines.

“GM’s Chevrolet and Cadillac brands have both had long, storied histories in motorsports,” says Jim Campbell, GM’s U.S. vice president of performance vehicles and motorsports. “Racing is a fundamental part of what we do — from transferring technology learned on the track to help us build better vehicles to connecting with consumers through something they love.”

GM has partnered with the Chevrolet Detroit Grand Prix since it returned to Belle Isle in 2012. The event generated $58 million in local spending last year. Chevrolet and Cadillac compete in several series during the race weekend.