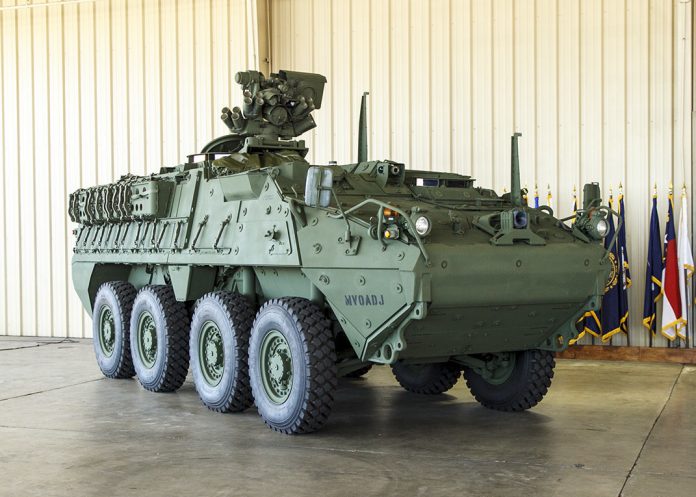 The U.S. Army has awarded General Dynamics Land Systems in Sterling Heights a $258 million contract modification to upgrade 116 Stryker flat-bottom vehicles to the Stryker A1 configuration.

The Stryker A1 builds upon the Double-V Hull configuration and provides improved survivability against mines and improvised explosive devices. It also has a 450-horsepower engine, 60,000-pound suspension, a 910-amp alternator, and an in-vehicle network.

Work will be performed in Sterling Heights, Lima, Ohio; Anniston, Ala.; and Tallahassee; with estimated completion in March 2020.

In related news, General Dynamics Ordnance and Tactical Systems in Florida was awarded a $33.8 million contract by the U.S. Army Contracting Command in Warren for the production of Army Ground Mobility Vehicles (AGMV) and associated kits.

The AGMV configuration is based on the GMV1.1 vehicle the company is delivering to the U.S. Department of Defense. It carries an airborne infantry squad with a payload capacity of more than 5,000 pounds. It shares about 90 percent parts commonality with the GMV1.1 and meets the same strategic lift requirements. The AGMV’s open design allows it to be easily modified and to accept already-developed kit configurations, such as remote and manned turrets, armor, and arctic kits.

“The AGMV brings the right capability and performance to the Army for their immediate need and future requirements due to its highly reliable, adaptable, and versatile design,” says Steve Elgin, vice president and general manager of armament and platform systems for General Dynamics Ordnance and Tactical Systems. “By leveraging the GMV1.1 program, the Army can take advantage of the engineering, development, and testing that has already been completed by Department of Defense. This significant time savings, along with the proven performance of the deployed GMV1.1 vehicles, gives the Army the ability to get this urgently needed capability into the warfighter’s hands now.”

Estimated completion of the contract is March 2019.

The GMV1.1 and AGMV are part of a family of vehicles developed by General Dynamics and Flyer Defense that also includes the Flyer60 ITV, the Flyer72 Light Reconnaissance Vehicle, and the newest variant, the Flyer72 Tactical Utility Vehicle.