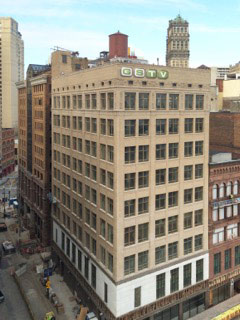 Gas Station TV is relocating its headquarters from Birmingham to downtown Detroit in the former Kresge building at 1201 Woodward Avenue (northwest corner of Woodward and State Street).

The company, owned by Rockbridge Growth Equity, which is affiliated with Quicken Loans, will move its entire operation, including more than 80 employees, and occupy three floors that collectively offer around 15,000 square feet of space. The structure is owned and managed by Bedrock Real Estate Services, which also is affiliated with Quicken Loans. Construction is underway with the move expected by June.

“Downtown Detroit has become a leading destination for innovative technology businesses,” says David Leider, CEO of GSTV. “Our all-new modern workspace in this thriving environment is exciting for our current team and will allow us to attract even more top talent.

Kraemer Design Group in downtown Detroit is the architect of record for the project. In addition to the offices, the firm is designing a demonstration area with various gas dispensers and video monitors. Reclaimed wood will be used in the design to build a canopy, creating the feel of an actual gas station.

The nine-story building was completed in 1891 and was the second location of the S.S. Kresge department store (the first was in Memphis). Sebastian S. Kresge went on to open more than 650 stores before launching Kmart in 1962 (in Garden City).

“GSTV is one of those simple, brilliant ideas that works,” says Dan Mullen, vice president of leasing and development at Bedrock Real Estate Services. “They will fit perfectly on Woodward Avenue among the numerous other growing technology companies and entrepreneurial startups along the city’s high-tech corridor.”