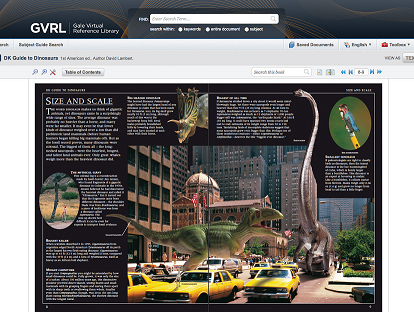 The recent addition of more than 400 e-books from John Wiley & Sons Inc. to the Gale Virtual Reference Library online service signifies a new direction for the Farmington Hills-based publisher, part of Cengage Learning, which emerged from Chapter 11 bankruptcy in April.

“We’ve evolved quite a bit from being a reference publisher of these big multi-volume encyclopedia sets to more of a software and solutions provider for libraries,” says Nader Qaimari, a spokesman for Gale. “Traditionally we’ve been focused on these big reference sources but now (with Wiley), we’re bringing in a lot of consumer content. We’re expanding our role and serving a larger demographic of users.”

The new titles cover subjects in business and economics, medicine, computer science, and psychology, and STEM (science, technology, engineering, and mathematics). Nearly 180 titles are from the For Dummies series and include Stock Investing For Dummies and Paleo Cookbook For Dummies.

Other recent additions to Gale’s offerings include Career Online High School, which launched at the Los Angeles Area Library in January and allows adults to earn an accredited high school diploma.

“All of this is an effort to reposition what the library means to people,” Qaimari says. “So we typically think of libraries as these big boxes of books, but they’re making an effort to reinvent themselves and we’re trying to help them do that. We’re allowing them to give diplomas and serve students in the classroom and people who are trying to start a small business. We believe in the value of libraries and always have,” he says.

The changes are just two of many that Gale will make in the coming year, made possible largely due to Cengage Learning’s recent financial restructuring, which eliminated approximately $4 billion in funded debt and secured $1.75 billion in exit financing.

“Because we were able to fix our balance sheet and eliminate all of this debt that was bogging us down, we’re now able to (better) invest in our products and people,” says Qaimari. He adds that he has hired more than 40 people within Gale’s sales and marketing department within the last six months.